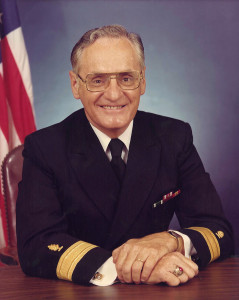 The Rear Admiral Lewis E. Angelo Professional Symposium grew out of a small gathering of Medical Service Corps Officers meeting in  conjunction with the American College of Healthcare Executives Annual Congress on Administration.

From its earliest days in the late 1970s, this Navy meeting focused on providing current military healthcare information to Navy Medical Department Officers. In recognition of the strong support provided by our then Chief of the Medical Service Corps, the Symposium was named in his honor upon his retirement in 1987. In that same year, Rear Admiral Angelo was presented the Silver Medal Award by the American College of Healthcare Executives in recognition of his lifetime professional achievements as a healthcare executive.